Keep up to date with the latest news! 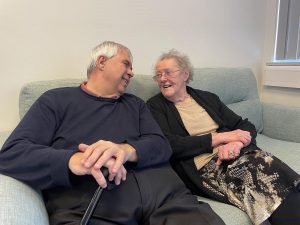 Tony Merifield became a befriender six years ago after working part-time in a supermarket. “I used to get a lot of people coming through the till by themselves,” he said. “By talking to them I realised just how many lonely people there were, and still are.”

During the pandemic Tony was put in contact with Margaret Rice, 86, by Shipley-based charity HALE, which runs services for over-50s. Tony and Margaret spoke regularly over the phone – and last week they met in person for the first time.

Tony, 73, a former Bradford Council worker from Bingley, said: “I could tell she needed to talk more than anything. I rang her nearly every day to make sure she was okay and just to talk. It helped.

“What Margaret doesn’t know is that while I was talking to her, she was helping me. I’d lost my mother, who I looked after for the last six months of her life because she had cancer. Margaret and I helped each other and that’s what it’s all about. It’s very worthwhile. I wish more people would take it on.” 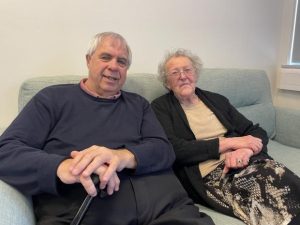 Margaret, a former teacher from Heaton, cared for her husband Bob, who had dementia, until he died seven years ago. She said: “I have some good friends and I tried to be strong, but I realised I needed some help. I couldn’t do it on my own. It’s such a relief to have somebody to talk to, somebody you can trust. We’re true friends. He’s absolutely wonderful.”

HALE also groups such as ‘knit and natter’, a lunch club and book club to encourage people to get out and about. Befriending volunteer co-ordinator Senta Romero said. “Since COVID, many people still won’t go out, especially the age group we work with. The last years of your life shouldn’t be locked up in your home because you’re nervous about getting out.”

This week is Mental Health Awareness Week, aimed at combating loneliness. Healthy Minds, the district’s network of mental health and wellbeing services, is urging people to reach out for support such as befriending projects and wellbeing groups. A study by the Mental Health Foundation shows that during lockdowns, loneliness was almost three times that of pre-pandemic levels. Office for National Statistics figures put the level in Bradford between October 2020 and May 2021 at nearly nine per cent.

Mind in Bradford has relaunched its Community Companions befriending service for people living with loneliness, isolation, anxiety and depression. Volunteer co-ordinator Donna Hudson said: “Loneliness can have a massive impact on mental and physical health. Befriending gives a sense of belonging, it builds friendships, confidence and self-esteem and supports individuals attending groups in their local communities.”